By early 1862, as the high waters of the Tennessee River were rising, many Confederates were recognizing that those waters were threatening Fort Henry, their fortification on the east bank of the river. Knowing that an attack by the Federal Army and Navy was not only inevitable, but likely imminent, it was decided that another fortification was needed on the west side of the river. This new fortification, named Fort Heiman, high on a bluff in Calloway County, Kentucky, was named after a famous architect-turned-Confederate soldier, Adolphus Heiman.

"The necessity of occupying these hills was apparent to me at the time I inspected Fort Henry early in November last, and on the 21st of that month Lieutenant Dixon, the local engineer, was ordered from Fort Donelson to Fort Henry to Fort Henry to make the necessary surveys and construct the additional works.He was at the same time informed that a large force of slaves, with troops to protect them, from Alabama, would report to him for work, which was to be pushed to completion as early as possible."

DEAR SIR: I am just starting for FortHeiman, opposite Fort Henry, where I have been for some time. The general came to Fort Henry on the 15th--and then it was, when I left, debated whether it was not too late to throw up works on the west side, as contemplated by Captain Dixon and every general who knows anything of the position of the Fort. All did concur in the opinion that a failure to occupy the heights would be equivalent to abandoning Fort Henry.

Occupy and intrench the heights opposite Fort Henry. Do not lose a moment. Work all night.

Work proceeded slowly, and this new fortification remained under construction when Federal Brigadier General Ulysses S. Grant launched his offensive in early February, 1862. Starting on February 4, as Grant was landing his troops to the north, Confederate troops were evacuated from FortHeiman, a process completed by 5:00 AM the next morning. The following day, Thursday, February 6, Federal forces, under the command of Brigadier General Charles F. Smith, took possession of an abandoned FortHeiman. Looking across the Tennessee River, Smith's troops saw the American flag flying at Fort Henry, which had fallen to the Federal gunboats after a brief, yet fierce, fight.

Shortly after the victory at Fort Henry, Ulysses Grant ordered Federal gunboats to proceed up the Tennessee River, destroying anything determined to be of military significance to the Confederates. He was also ordered by his superior to hold Fort Henry at all costs. In less than a week, Grant's army proceeded eastward and attacked Fort Donelson. After a fierce naval and land fight, Grant received the surrender of Fort Donelson on Sunday, February 16, 1862. By the end of February, 1862, Nashville was in Federal hands, and the American flag was flying in three former Confederate forts. The Civil War had now entered a new dimension.

Federal forces occupied FortsHeimanand Henry for over a year until abandoned in early 1863. During this period, a number of local enslaved men, women, and children sought protection from the Federal forces at FortHeimanas they were hoping to make a transition from enslavement to freedom.

“It is my present design to take possession of Fort

Heiman, on the Tennessee River, below

Johnsonville, and thus prevent all communication

with Johnsonville by transports.”

Shortly after writing this, Forrest positioned himself at Fort Heimanand Paris Landing, and, from there, launched his campaign against the Federal Johnsonville supply depot, where a significant battle was fought on November 4 and 5, 1864.

You are able to visit Fort Heiman today thanks to the hard work and dedication of many local citizens and partners who care deeply about their history. Recognizing the importance of the land and the stories, the site was added to the National Register of Historic Places on December 12, 1976. And, thanks to the hard work of many, the site was added to the boundary of Fort Donelson National Battlefield on October 30, 2006.

Following the Union victory at Forts Heiman and Henry, in February of 1862, Federal forces occupied both forts until the spring of 1863, when they were abandoned. Soldier accounts tell how, at Fort Heiman, some of the earthwork fortifications were leveled and destroyed as part of that abandonment. Today, at Fort Heiman, visitors can see some of the Confederate-built interior fortifications, as well as portions of the remaining Federal redoubt. 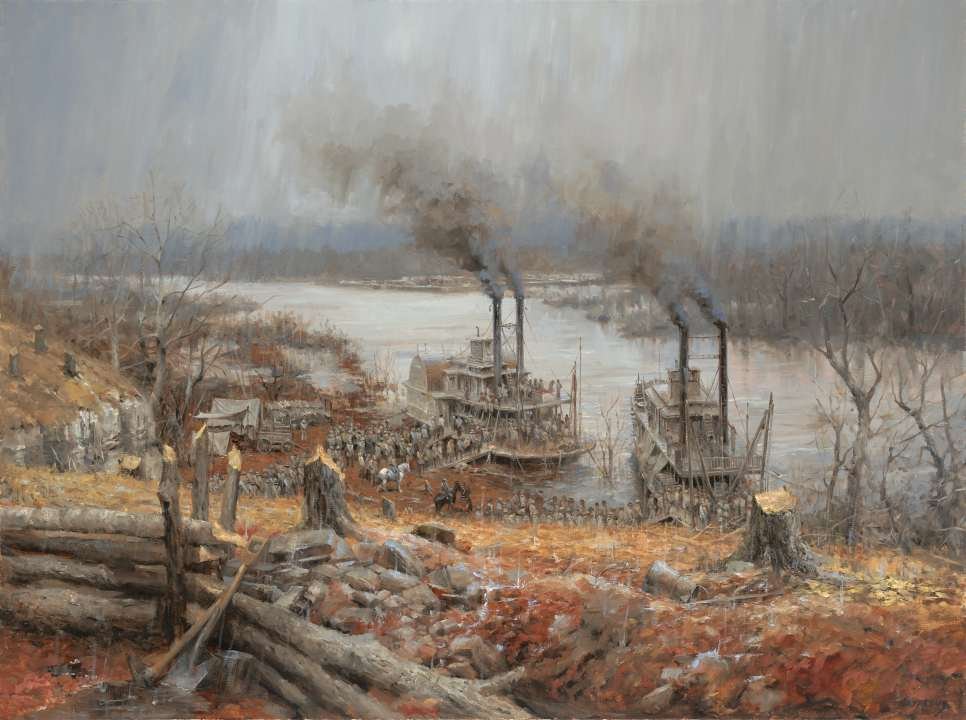